lit. "The Shrine of the Grafted Arm", see the legend below. 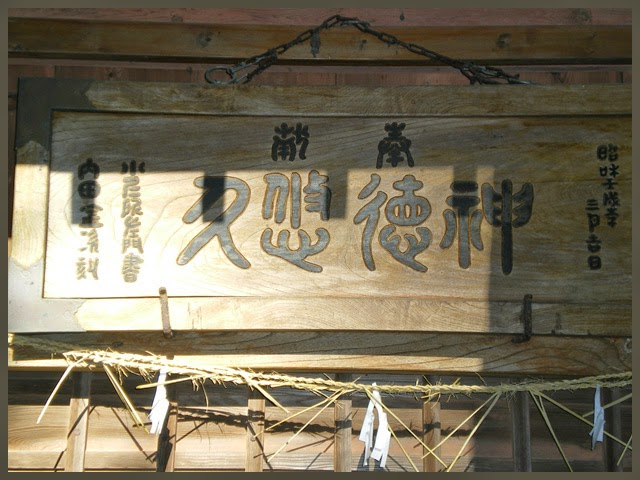 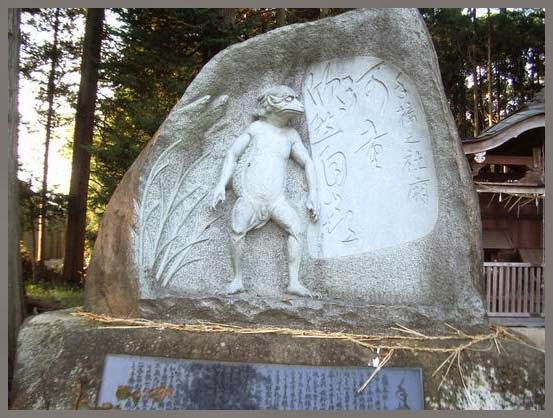 Praying at this shrine will help heal problems with your hand and arms.

There are many legends of a Kappa who had exchanged his arm for a special medicine and then died, but this legend comes in some versions. - quote
Once upon a time
some say it was toward the end of the Heian period, on a late afternoon, the Lord Serizawa 芹澤氏 was riding alone along the banks of a river. A kappa lived in this river at that time.
Suddenly his horse stopped.
When the lord looked down he saw a Kappa pulling at its tail to get the horse into the water. 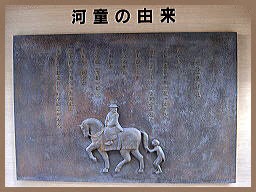 The Lord was taken by surprize.
"His must be the bad guy who is doing so much harm to the villagers all the time!"
He took his sword, grabed the tail of his horse and cut off the arm of the Kappa.
The Kappa had to jump back into the water without his arm and the hand with the web between the fingers 水掻き to make his such a good swimmer.

The Lord thought this arm of the Kappa was quite special and put it up on the shelf in the tokonoma 床の間 decoration alcove of his reception room.

Late at night a lone man knocked at his gate and asked for a lodging for this night.
His face was a pale green and he had only one arm.
The Lord did not want to ask the poor man about the reason for the missing arm and had a bed prepared for him. Then he went to sleep himself. 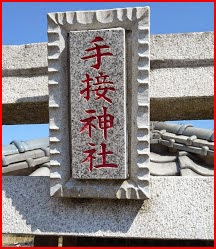 - - - BUT
at midnight, he felt the presence of another being and indeed, when he checked, the man was just trying to steal the arm of the Kappa from the shelf.

"Hey, so you are a thief after all!" he yelled at the man.
The man turned into a Kappa in no time, grabbed the arm on the shelf and tried to run out of the estate.

But the Lord, who was a strong man, caught the Kappa and bound him with a rope.
"At least now we know who you are, you vicious Kappa.
I will not allow you to harm my villagers any more, you bad bad Kappa!"

"Dear Lord, please forgive me, I will never be bad again. Please, please, let me go back to my river! I understand your anger very well, but you see, I have an old mother and if I do not come home to care for her, she will die too. Just thinking about her makes me so sad!"

When the Lord heard this story, he felt pity with the Kappa.
"Well, because of your mother I will forgive you for today. But you have to promise never to do any harm again. As a punishment for your misdeeds so far, I will keep this arm of yours!"

But the Kappa pleaded again. If he dose not get his arm back, he said, he can do nothing and not help his old mother and in the end, the Lord let him have the arm back.

"For the sake of your mother and since you seem to care so much for her (oya kookoo 親孝行),
I will let you have the arm back."
"Thank you so very much, my Lord. I will never forget you and pay you back a favor some time!"

Then came a very cold day of winter, with a strong cold gale blowing and on this morning, nothing was hanging on the branch.
"I wonder what happened to our fish provider. Maybe he is ill?"
And the Lord went down to the river to have a look.

When he looked down at the river from the bank, he saw something bobbing in the water.
When he came closer, he saw the dead body of the Kappa with o huge would on one of his arms.
And in his hand the Kappa was grabbing a huge huge carp.

When the Lord saw the hand grabbing the carp, he suddenly realized who had brought a fish to his garden every morning. It was the Kappa he had once spared the life!
So the Lord had a shrine build upstream to venerate and thank the Kappa for his daily presents-
the Tetsugi Jinja - lit. "The Shrine of the Grafted Arm".
The End.
- reference : isituka_mitiko


Another source quoted that the Kappa was also passing on the recipe for a medicine to heal wounds.
The family of Serizawa kept the medicine for many many generations, and after they lost their status as samurai, they made a living as doctors.
Serizawa Kamo 芹沢鴨 (? - 1863), of the Shinsengumi, was a member of this clan.
- reference : shittaka37.seesaa.net 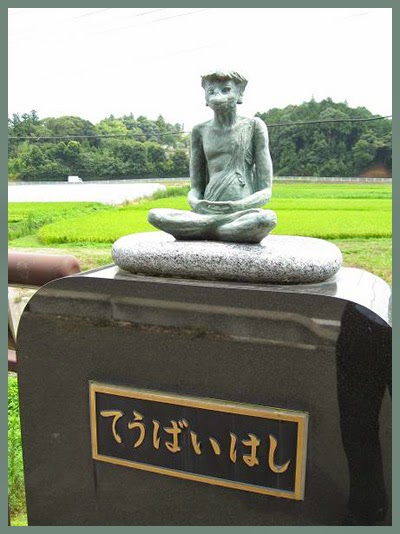 The name of the bridge is also given as 手奪橋 Teubaibashi - bridge of the captured arm.
across the river 梶無川 Kajinashigawa.
（茨城県行方市玉造町芹沢橋)
The Kappa grabbed the horse's tail when the Lord rode over this bridge.
- reference : ameblo.jp/shokokai-namegata 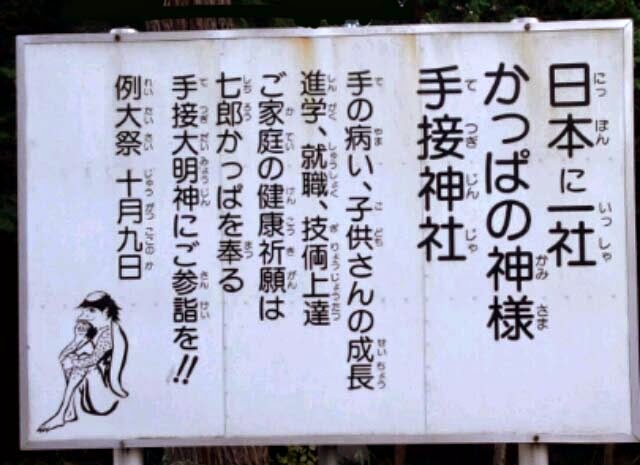 The name of the Kappa is given as 七郎河童 Shichiro Kappa. 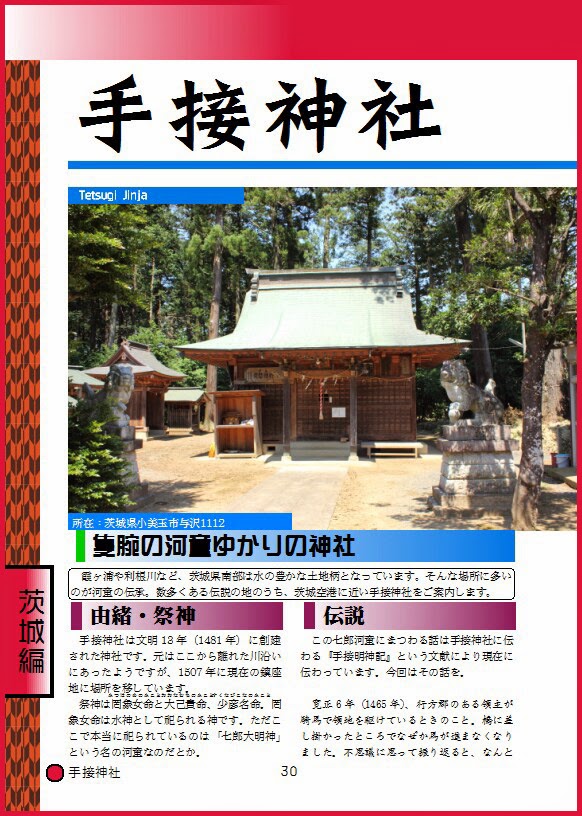 
- quote -
Serizawa Kamo 芹沢鴨 (1826? – October 30?, 1863)
was a samurai known for being the original lead commander of the Shinsengumi. He trained in and received a licence in the Shindō Munen-ryū. "Kamo" means goose or duck in Japanese which was an odd name to call oneself at the time.
His full name was Serizawa Kamo Taira no Mitsumoto (Serizawa=family name, Kamo=given name, Taira=family clan name, Mitsumoto=formal given name.)

The Serizawa family were upper-seat Goshi rank samurai in Serizawa village in Mito which is now the capital of Ibaraki Prefecture in Japan. Kamo was born as the youngest son and his childhood name was Genta. He had two older brothers and an older sister. He was educated with the Sonnō jōi ideals (meaning revere the Tenno (emperor) and expel the foreigners) and swordsmanship since childhood at Kodoukan which was a state school in Mito. Mito is a sub-branch of the Tokugawa family and it was considered the motherland of the Sonnō Jōi ideology and was a center of support for the Tennō and the Imperial court, which helped fuel the Revolution. 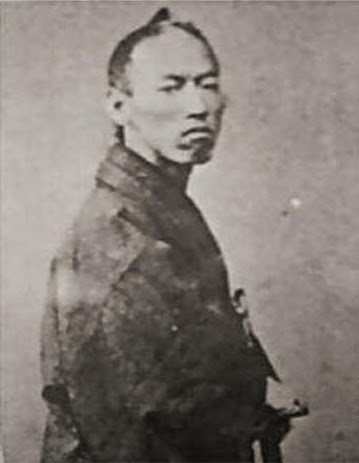 Although no portrait of Kamo remains, it is said he was a large man with very pale skin and small eyes.

On one hand, Serizawa was quite bold and fearless and on the other hand, he was extremely selfish and had a terribly short temper so he started fights often. If he was in a bad mood he would get violent, especially when he was drinking, and he was a heavy drinker.
He was an idealist who held very strong pro-Imperial court beliefs and took the Sonno-joi beliefs very seriously while at the same time siding with the Tokugawa regime. A small fact that is less well-known is that Serizawa was good at drawing and showed his drawings to children.
- source : wikipedia