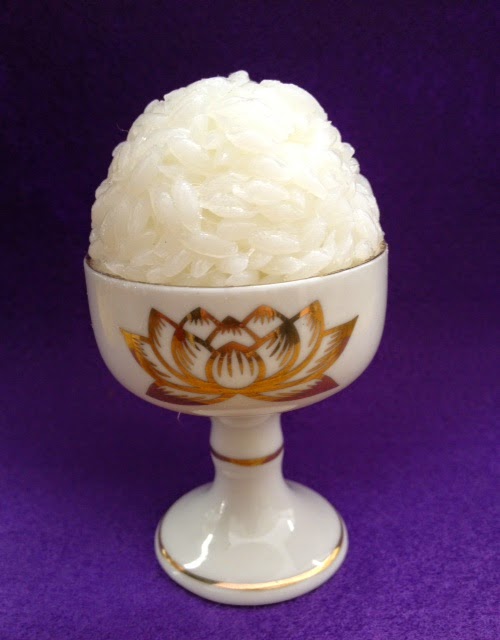 Most families make a food offering every morning at the altar of the ancestors.
The ancestor deity enjoys the rice offering by looking and smelling at it.
After the offering is made to the ancestors and deities, it is eaten in gratitude by humans.
Rice is never wasted, not even a single grain of it.

When a human eats rice offerings, there emanate strong rays from his eyes. The Kappa is afraid of them and runs away. He can also not win at sumo wrestling with someone having eaten rice offerings.

There are many stories in Kyushu about the power of humans and even animals, after eating the rice offerings. and the Garappa is running away.

The river is also called 魔の川, a deadly river.
Until about 1918 the most favorite place for swimming was a pond for fire extinguishing purposes, about 12 meters long and 6 meters wide. The pond was 2 meters deep and had a stone wall around it of about 2 meters height. Trees were planted around it and it was good to relax here in summer. 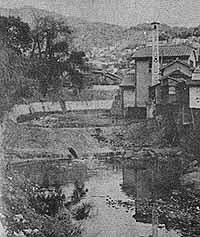 But there were also water accidents and five people died here. At that time there were rumours of Kappa and Kawauso 川獺 otters pulling children into the water, so, to be on the safe side, all swimming was forbidden.

Grandfathers of the town still tell their children:
"If you eat the rice offerings and go to the river after that,
the Kappa will not be able to pull you in."
- source : eonet.ne.jp/~nagasaki

ami 網 net
In some parts of Kagoshima the Garappe does not like nets. So the humans can wear a net to protect themselves when working along riversides.


ha 人間の歯 human teeth
In some regions in Kyushu Kappa is said to dislike human teeth.


hai、butsudan no hai 仏壇の灰 ashes from the family altar
The ashes of Buddhist offerings of incense are rubbed on the human body before starting a sumo wrestling match with a Kappa. Then the human will win.

. Kappa hi yaroo 河童火やろう "Kappa I will give you fire" .
legend from Akita

. Kappa hi o yaroo 河童火をやろう "Kappa I will give you fire" .
legend from Fukushima

- quote
The Kappa’s fear of metal, especially iron can be traced to the role of megalithic beliefs in folklore.
An example of this would be the Chinese water spirit, chiao-dragon, who is frightened away by anything made of iron or the miners of Halmahera who would boil iron in their drinking water prior to consumption . . .
(Ishida and Yoshida 1950, 34).
- source : Ken Lim

If you hang some metal things like a sickle or a spade 鎌や鋤 at the door of the horse barn, the Kappa can not come in. Other people hang metal nails on the eaves. Farmers carry a metal sickle to protect themselves on the wet rice fields.
The Kappa especially does not like the flimmering and glittering of metal things in the sunshine.

In some regions in Kyushu it is customary after digging an irrigation pond to throw some metal things like a hatchet into it. This will prevent the Kappa from living in this pond and doing harm to the farmers.


koke 苔 moss
If horses eat a bit from the moss growing on the grave of Lord Ozumi 大積隆鎮, a Kappa will not be able to pull them into water.
. Kappa legends from Fukushima .

. michikiri, michi-kiri 道切 cutting off a road with amulets .
to prevent a kappa or yokai from entering a village

- - - - -
There are legends in Tosa about this. If someone has to go into a Kappa river, he better fixes some deer horn on his body to prevent the Kappa from killing him and taking his liver away.

The shrine is dedicated to Masatsuna. 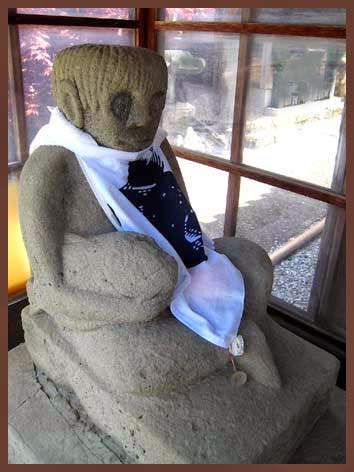 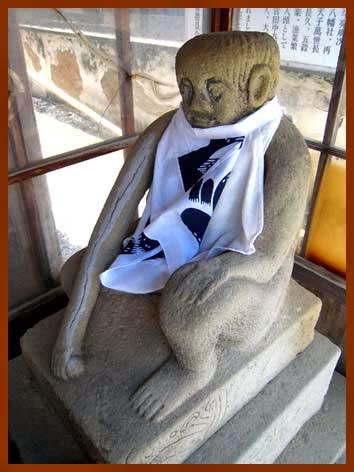 Komainu statues of a Kappa at the Shrine gate

Once upon a time
the Lord was on his way home late in the evening. Suddenly felt something jumping on his back and clinging to it. He tried to get rid of it, but it clung strongly.
Yes, indeed, it was a Kappa in great pain, with tears in his eyes, who pleased with the Lord to carry him for a while.
The gentle Lord let the Kappa have its way.
On the next morning, in front of the castle gate, there was a large sea bream as an offering for him. Surely this was a present from the Kappa he had helped last night.

And then one day
a retainer fixed the horns of a deer at the gate to make it easier for the fish to be offered. But - oh wonder - there were no more fish from that day on.
The Kappa must really dislike the horns of a deer very much ! 河童は鹿の角が大嫌い.
The End
- source : sinsi/fukuda/kappa

tadejiru, tade-jiru 蓼汁 soup from the water pepper plant
Polygonum hydropiper. The leaves are squeezed for a pungent hot soup.

At the riverbank 大淵 at Kurumeki town 久留女木 in Shizuoka a young monk from the Dragon Shrine / Dragon Palace helped the busy farmers with their work in the fields. The farmers offered him some soup from the water pepper plant 蓼汁, which he did not really like at all, and he died.
This gentle Kappa was kind enough to help the farmers.
- source : www.nichibun.ac.jp


A legend from Aichi 愛知県, Chita Hanto peninsula 知多半島 and Shikushima
The legend tells of the God of the Hearth, 竈神 Kamadogami and a Kappa. 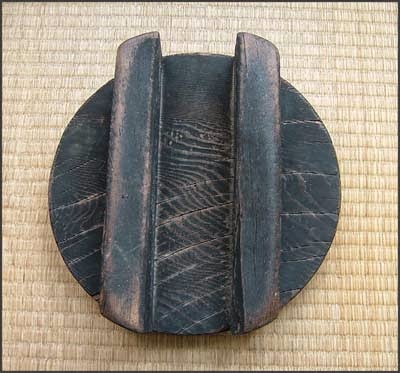 Once upon a time
a Kappa lived on the lid of the kitchen stove 竈の蓋 of a good family. This Kappa, also callen Enko 猿侯, helped the family with their work. One day in a very hot summer, they prepared a soup from water pepper, which is a speciality of this region, and offered it to the Kappa. The soup was very bitter and the Kappa did not like it. Angry, he ran away.
After that the good fortune of the family declined rapidly.
- source : forumdoi.exblog.jp - ｶｯﾊﾟ・猿侯

. Deity of the Kitchen and the Hearth 竈神 .

- quote -
story of Yagoro kappa which "Even the best swimmers can drown" was derived from, story that it was if kappa dislikes bamboo shoot,
- source : www.kurume-hotomeki -
Kuruppa - Kappa from Kuruma


This needs to be explored further.
tba


It also works the other way, people dislike and fear the Kappa.

- quote -
Fear of kappa is phobia of kappa
The fear or phobia of kappa can produce both physical and physiological symptoms. In some cases, the physical symptoms are similar to those associated with typical anxiety disorder such as sweating, nervousness, nausea, rapid heartbeat, difficulty breathing, increased blood pressure, and tightness in the chest. Some psychological symptoms may include panic, overwhelming fear or dread, as well as general emotional distress. Depression symptoms or depression disorder may also accompany the phobia of kappa or those like it. The depression could be a symptom of the phobia or an effect of the phobia and how it can change a person's day to day life.

A phobia like this one can affect anyone of any age, sex, race, or background. Some people may be more prone to phobias like this one or may experience more severe symptoms than others. Fear is a natural human feeling and anyone can develop a phobia.

The phobia of kappa can be treated.
Cognitive behavioral therapy is usually the most effective treatment for a phobia like this one. It is also used to treat certain anxiety disorders, depression disorders, and mood disorders. Through cognitive behavioral therapy, a person affected by this phobia will essentially "learn" to not fear kappa anymore. This will be achieved by changing the behavior of the person and the person's brain when they come in contact with or see kappa. This can be achieved without the use of anxiety medication, eventually a full recovery from this phobia is possible.

Commonly, people do not understand why they have a phobia of kappa. Fears like these can cause embarrassment and further anxiety because it's hard to understand why phobias like this arise. Many people may feel silly or fear that others will judge them for being afraid.

Fear and anxiety are natural parts of life, everyone is afraid of something and it is common for people to avoid the things that they are afraid of, especially when they feel what they fear may be potentially dangerous to them or those they care for. In the same sense, it is common for those with a phobia of kappa to avoid situations where they will be near them or see them.

Phobias like the phobia of kappa vary from person to person, some people who suffer from this will have severe anxiety attacks because of it and some will only have minor anxiety. What triggers this phobia will also vary depending on the person who suffers from it. Some only feel this fear when they are near kappa while some experience anxiety attacks associated with this phobia from simply seeing a picture of a kappa or thinking about one.

It's suggested that a person suffering from a phobia of kappa take steps to begin conquering this fear. For example, most who have this fear understand that it is illogical. They have no real or logical reason to feel this crippling fear. Even so, it continues to frighten them and affect their day to day lives. Beginning to understand this fear is a step in the right direction. Understanding a phobia is one of the first steps in being able to recover from it. After that, receiving treatment from a licensed specialist to help battle a phobia like this one is one of the best things a person can do. It may also be helpful to address other problems a person may have like anxiety, depression, or other phobias.
- source : phobiaof.com/kappax