MORE to explore on this external link
- source : frontiersofzoology.blogspot.jp

SLIMY FOOTPRINTS
At around 11 PM on August 1, 1984 in the town of Tsushima in Nagasaki prefecture, a squid fisherman named Ryu Shirozaki was walking home from the local pier after work. As he passed near the Kuta river, he came upon a small group of children playing at the water's edge. While it was not entirely uncommon to encounter people fishing in the river at night, it was rather surprising to see youngsters there.

As Shirozaki approached the children, he was struck by how bizarre they appeared in the moonlight. He could make out swarthy faces, unusually spindly arms and legs, and glistening skin. Suspicious, Shirozaki called out to them as he neared, but they seemed startled and quickly disappeared into the water.

The next morning when he returned to the same spot, Shirozaki discovered a set of moist, teardrop-shaped footprints on the nearby pavement. The prints, which appeared to consist of a slimy substance that had begun to coagulate under the hot morning sun, stretched for about 20 meters. Each footprint measured 22 centimeters (about 10 in) long and 12 centimeters (5 in) wide, and they were spaced about 50 to 60 centimeters (about 2 ft) apart.

When police forensic investigators arrived on the scene, they determined that the slimy footprints consisted of an unknown secretion. They took a sample to the lab for analysis, but the results unfortunately turned out to be inconclusive because the sample was too small. The police eventually dropped their investigation, and the mystery of the slimy footprints was never solved.

THE UNCLEAN GUEST
Another recent kappa encounter occurred on June 30, 1991 in the town of Saito in Miyazaki prefecture, when an office worker named Mitsugu Matsumoto and his wife Junko returned home for the evening. Upon opening the front door, the Matsumotos were confronted with a strange smell inside their home. Inside, they found dozens of small, wet footprints around the front door and in the hallway, bathroom, and two tatami rooms. At first they suspected a burglar, but they soon realized nothing had been stolen.

The police briefly surveyed the house, but found nothing except a floor soiled by 30 footprints, each measuring about 7 centimeters long and 6 centimeters wide, and having 4 or 5 toes. To Matsumoto, the footprints did not look human, nor did they appear to belong to any animal he could imagine.

Later that night, as Mrs. Matsumoto was putting laundry away, she discovered an unusual orange stain on some clothing. The next morning, as Matsumoto inspected the house more closely, he discovered a deposit of orange liquid on the portable stereo in the tatami room. He took a sample to the local public health center for analysis, and the results indicated the liquid had an extremely high iron content and a chemical composition resembling spring water.

Troubled by the incident, Matsumoto decided to visit a shaman. After listening to Matsumoto's story, the shaman encouraged him not to worry, explaining that the kappa indigenous to the nearby swamp enjoyed playing the occasional prank on local residents. The kappa were harmless, the shaman told him.

Harmless, perhaps, but Matsumoto found the kappa difficult to clean up after. He tried using detergent, paint thinner and gasoline to remove the footprints and orange stains, but nothing seemed to work.
Sources: Shin-ichiro Namiki, "Nippon No Kaiki Hyaku", 2007 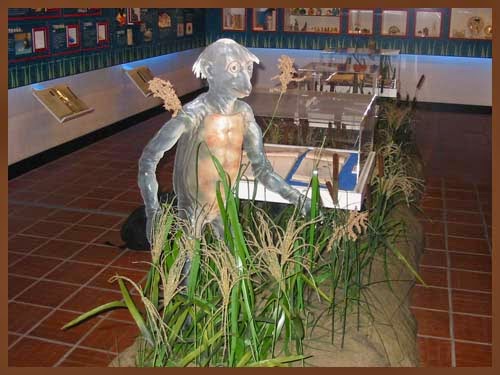 Hairy "Kappas" - Aquatic Kappas
In this case, I would think that the 5-fingered and toed, hairy"Kappas" in the first two rows above represent Hibagons, larger and more apelike creatures than the Freshwater Kappas. In the Kappa pictures below, most of them are of a slenderer, more monkeylike build: and if there is any further complication to be considered, it might well be that some artists make freshwater Kappas too much like the "Known" Japanese macaques.
The hairy Kappas have hair on top of their heads, but it is not exaggerated into the ruffle or mane seen on the FW Kappas. In the stories above, I take the slimy teardrop-shaped tracks to be FW Kappa tracks, basically triangular but number of toes indistinct, tracking pond scum around with their feet: the rusty footprints come friom a four-or-five-toed creature but the tracks do not include the heel, only the forepart of the foot. They are possibly also [composite] dog tracks. Whatever it is had waded through rust-tainted water or mud puddles.