- quote
Otter is a common name for a carnivorous mammal in subfamily Lutrinae. The 13 extant otter species are all semiaquatic, aquatic or marine, with diets based on fish and invertebrates. 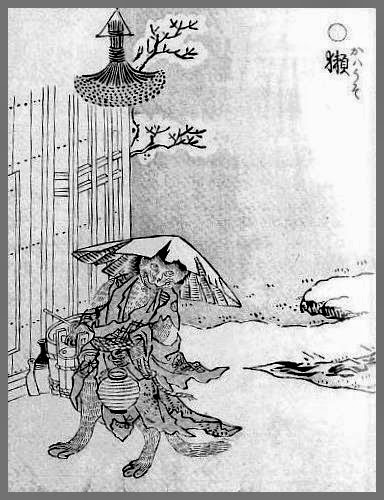 In Japanese, they are called "kawauso" (獺、川獺).
In Japanese folklore, they fool humans like the fox (kitsune) and tanuki. In the Noto region, Ishikawa Prefecture, there are stories where they shapeshift into beautiful women or children wearing checker-patterned clothing, and if a human attempts to speak to one, they will answer "oraya" and then answer "araya," and if anybody asks them anything, then they say cryptic things like "kawai," and there are also dreadful stories like the one in the Kaga Province (now Ishikawa Prefecture) where an otter that lives in the castle's moat would shapeshift into a woman, invite males, and eat and kill them.

In the kaidan, essays, and legends of the Edo period like the "Urami Kanawa" (裏見寒話), "Taihei Hyaku Monogatari" (太平百物語), and the "Shifu Goroku" (四不語録), there are tales about strange occurrences like otters that shapeshift into beautiful women and kill men.

In the town of Numatachi, Asa District, Hiroshima Prefecture (now Hiroshima), they are called "tomo no kawauso" (伴のカワウソ) and "ato no kawauso" (阿戸のカワウソ), and it is said that they would shapeshift into monks and appear before passers-by, and if the passer-by tries to get close and look up, its height would steadily increase until it became a large monk.

In the Tsugaru region, Aomori Prefecture, they are said to possess humans, and it is said that those possessed by otters would lose their stamina as if their soul has been extracted. They are also said to shapeshift into severed heads and get caught in fishing nets.

In the Kashima District and the Hakui District in Ishikawa Prefecture, they are seen as a yōkai under the name kabuso or kawaso, and they perform pranks like extinguishing the fire of the paper lanterns of people who walk on roads at night, shapeshift into a beautiful woman of 18–19 years of age and fool people, or fool people and make them try to engage in sumo against a rock or a tree stump. It is said that they speak human words, and sometimes people would be called and stop while walking on roads.

In an Ainu folktale, in Urashibetsu (in Abashiri, Hokkaido), there are stories where monster otters would shapeshift into humans, go into homes where there were beautiful girls, and try to kill the girl and make her its wife. 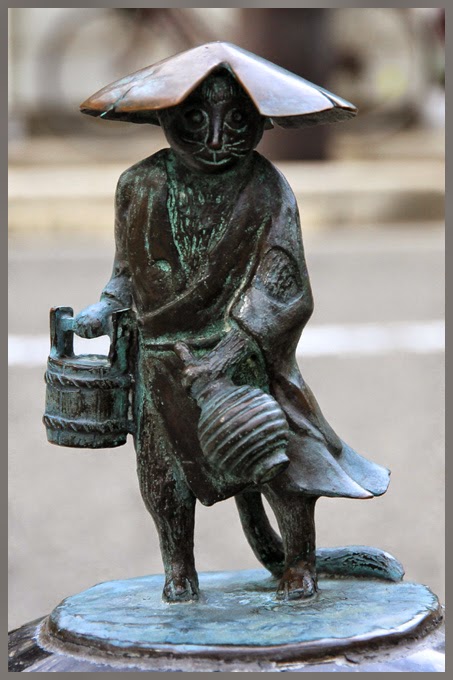 In the Ishikawa and Kochi Prefectures, they are also said to be a type of kappa, and there are stories told about how they engage in sumo with other otters.
In places like the Hokuriku region, Kii, and Shikoku, the otters themselves are seen as a type of kappa.
In the Kagakushū, a dictionary from the Muromachi period, an otter that grew old becomes a kappa.
- source : wikipedia 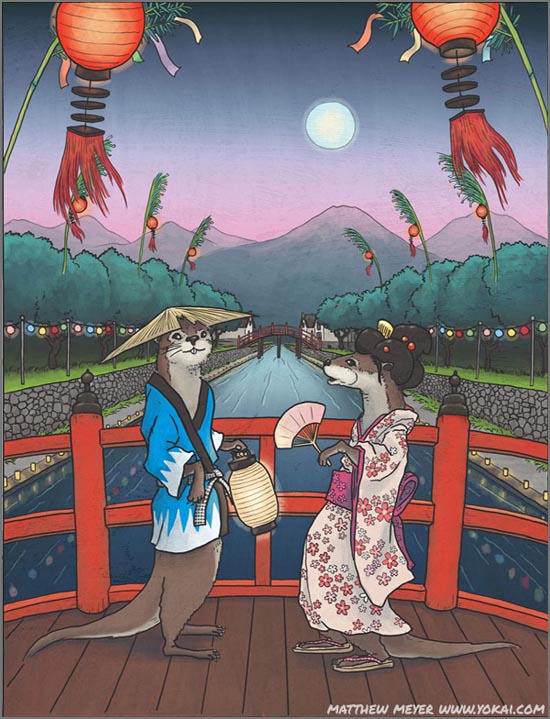 APPEARANCE:
River otters can be found in the wilds all over Japan. They are under a meter in total length, and well-loved for their shy, playful nature and cute faces.
BEHAVIOR:
As with most wild animals in Japan, kawauso develop magical powers upon reaching old age. They are particularly skilled at shape-changing and accurately copying sounds. They love alcohol, and are usually only seen in human areas when trying to acquire sake. They are playful yokai, well known for tricks and mischief, but very rarely dangerous.
INTERACTIONS:
Kawauso are fond of playing pranks on humans, especially by mimicking sounds and words. They enjoy calling out human names or random words at strangers walking in the street and watching their confused reactions. They are fond of magically snuffing out lanterns in the night and leaving travelers stranded in the dark. Others transform into beautiful young women and try to seduce young men, and then run away laughing.
Occasionally
kawauso do commit more violent deeds. In a few instances near castles in Ishikawa, a kawauso dressed up as beautiful young woman was found luring men to the water’s edge in order to catch and eat them, discarding the half-eaten bodies into the moat.
OTHER FORMS:
A Kawauso’s favorite disguise is the form of a young beggar child wearing a big straw hat. They use this child form to sneak into towns and try to buy alcohol from shops. The ruse often falls apart when the disguised creature is asked who it is, or where it came from. Caught off-guard, it simply repeats the last word spoken to it, or makes funny nonsensical noises, ruining its disguise and giving away its supernatural nature.
- source : yokai.com/kawauso - 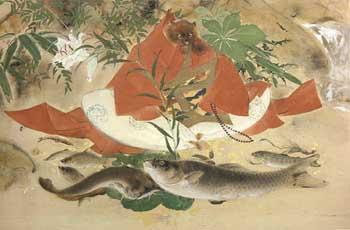