At the river pool near the bridge of Osanai village 土川心像の生内 there is a 河童石 stone where the Kappa likes to sit, with a dent in the stone.
In summer when the water gets less, the seat is quite visible and then gets forgotten.
Once in August there was a very strong rain and storm and the river pool was well flooded that even the top of the stone was hardly to be seen.
An old man 84 years of age living nearby remembered:
"Yes, it is like they say, the stone will be under water every 60 years."

Anyway, once upon a time
the home of 五郎右工門 Gorozaemon of the village kept horses and cared well for them. They even kept two very vigorous stallions, riding to the river pool morning and evening to wash them. Then one day in summer when they wanted to go back home one went wild with fear and gallopped into the horse barn. When the farmer looked, he saw that a Kappa was hanging onto the tail of the horse. They tried to get hold of the Kappa and catch him. The Kappa jumped into the fodder box and hid there.
But in the end with all the neighbours helping they got hold of the Kappa. His plate on the head had been almost dry and his power was gone.
He made the farmers understand with his best body language that he would not do any harm any more and they should let him go. So they did.
From that day on there had never been a drowning accident of children at this river pool.

Once upon a time
there was a very rich farmer, 甚吉 Jinkichi, near the Tanegawa river who kept 40 horses.
One day after washing the horses at the Tanegawa river pool and trying to get them into the stable, the horses did not want to do what they did every day. When Jinkichi and his men looked closer, he saw a young Kappa crouching in a corner.
"Let's get him!" they shouted.
Then they told him all his misdeeds:
"You took the child of xyz, you killed the daughter of yxz, you also killed the horse of zyx . . . " and the Kappe admitted each one very docile and meek.
"And today you tried to pull a horse into the river, clinging to its tail, did you not?!"
But after all was said and made clear, the Kappa promised never to do any harm again to humans or animals and then they let him to.

The stone where he went back into the river is now called Kawado-ishi.

At the river Nojirigawa 野尻川 there was a Kappa stone.
At the river pool called Araifuchi 洗い淵 people come to wash the horses.
Then some day a Kappa hang on to the tail of a horse.
The farmers made him promise to never come higher than the stone at the side of the bridge and he signed a contract about this. Then he could go.
But eventually this stone was washed away during a flooding.
The contract which was written with the blood from the Kappa biting off his finger had been kept in the Kannon hall 観音様のお堂, but this was also lost.


Nowadays there is a hot spring with a Kappa legend:
金山町 玉梨温泉のかっぱの湯 Kappa no Yu 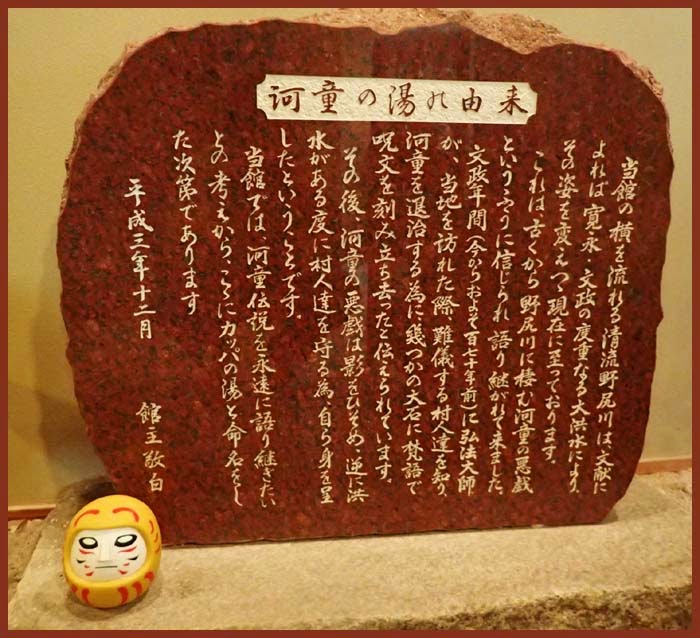 About 1700 years ago, the villagers had been in distress from the malicious deeds of a Kappa.
A mendicant monk passed the village and tried to help them. He engraved ritual Sanskrit letters on a large stone 大石に梵語 to ward off the Kappa.

At this hot spring hotel, the story has become the origin of it's name
Kappa Hot Spring かっぱの湯.
- source : www5c.biglobe.ne.jp/~angel-hi

Once a Kappa jumped from the かっぱ岩 Kappa boulder to grab a horse the villagers were washing, but he got caught himself.
The Kappa pleaded to let him go free and he would grant them one wish.
So the landlord said: 朱塗りの膳 "Bring me 20 food trays in red laquer, then I will pardon you.!
The next morning, the trays were delivered and the Kappa got free. 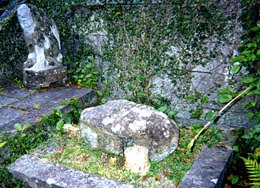 Once upon a time
people depended on rain water in their daily life. During a drought, plants and animals withered and humans had to perform rain rituals (amagoi) to get help.
In the Suijin shrine in our village the Shinto priest planted a stone and used the color of the moss to divine when the rain would come 苔の色で降雨.

The river 中島川 Nakashimagawa, which is a long river in Nagasaki prefecture, was a very clean river with clear drinkable water and people relied on it for all things at home and in the fields..
Then more homes where build, more people came to live here and the water became dirty. Even the Kappa, which lived upstream, could not live in the filthy water any more.
So they sometimes stormed into the human habitats and devastated the crops and things.

Since olden times the shrine had pleaded with the authorities to take care and keep the water clean. Every year on an auspicious day in May the priest invited the Kappa, gave them food and drink and entertained them like special guests - this is a special event even now 珍しい行事.
The priests caring for the temple have all been from the 渋江家 Shibue family since generations.
Some say they descend from the line of King 栗隈王 / 栗前王（くりくまのおおきみ) Kurikuma no Okimi (? - 676) .

The inner sanctuary of the shrine was cut off with sacred ropes and only the Kappa were allowed to come in there and enjoy themselves with food and drink. Some say the Shinto priests were able to see the Kappa having their feast.
The Kappa shouted with joy - kii kii - and the sound of the plates on their head was to be heard outside.
During this feast, they had to prepare a dish with bamboo shoots at any cost, with bamboo picked by the priest and only the most soft and juicy pieces offered to the kappa.
The old dry parts of the bamboo were cut into rings 竹の子の輪切り and offered to look at.

One priest had once heard the Kappa complain:
"Oh dear, these humans must have strong and hard teeth to chew the hard parts of bamboo!"

But anyway, the Kappa have since then stopped to do malicious deeds in the village.
And every time on the night before there are special visitors to the shrine or during a shrine festival, the priests places a letter on the Kappa stone, asking the Kappa to bring food 河童の献立:
"Dear Kappa san, tomorrow is a special day and we need to prepare a feast.
Please bring this and that vegetable and fish, please!"
And indeed,
next morning the food was presented on the stone - the Kappa had done well.


. Nagasaki - Kappa stories of this BLOG .

A Kappa came every night to the outhouse of a farmhouse and reached out (for the shirikodama anus treasure). So the farmer one night cut off the hand.
The Kappa came back and got his hand back in exchange for medicine to heal wounds.
There is a Kappa stone related to this story.