- quote
Kamishibai (紙芝居), literally "paper drama",
is a form of storytelling that originated in Japanese Buddhist temples in the 12th century, where monks used emakimono (picture scrolls) to convey stories with moral lessons to a mostly illiterate audience. 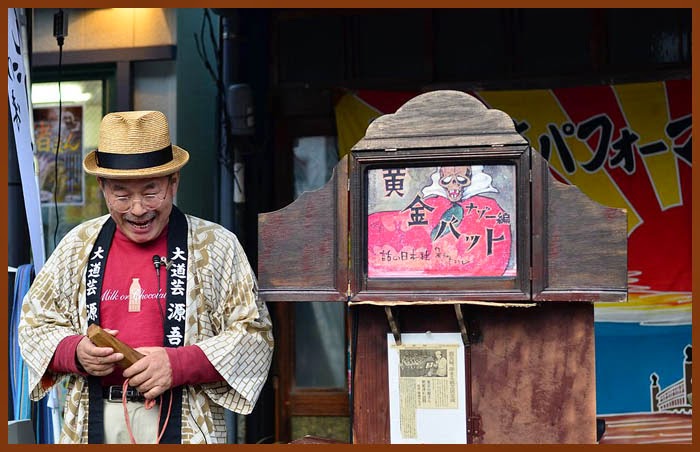 - - - - - History
Kamishibai endured as a storytelling method for centuries, but is perhaps best known for its revival in the 1920s through the 1950s. The gaito kamishibaiya, or kamishibai storyteller, rode from village to village on a bicycle equipped with a small stage. On arrival, the storyteller used two wooden clappers, called hyoshigi, to announce his arrival. Children who bought candy from the storyteller got the best seats in front of the stage. Once an audience assembled, the storyteller told several stories using a set of illustrated boards, inserted into the stage and withdrawn one by one as the story was told. The stories were often serials and new episodes were told on each visit to the village.

The revival of kamishibai can be tied to the global depression of the late 1920s when it offered a means by which an unemployed man could earn a small income. The tradition was largely supplanted by the advent of television in the late 1950s but has recently enjoyed a revival in Japanese libraries and elementary schools. Some Americans have translated traditional kamishibai into English and offer them as part of a "Balanced Literacy" teaching philosophy.

It is now possible to find street kamishibai activity also outside of Japan. Artists are presently active in Italy, while in New Zealand, Tanya Batt, an Indian storyteller/children's author and cycling enthusiast, used it to combine two of her passions and built a replicated kamishibai "Spoke N' Word" theatre for use by her local community trust.

- - - - - Modern usage
- - - - As a management tool
As part of the Toyota production system, kamishibai boards are used as a visual control for performing audits within a manufacturing process. A series of cards are placed on a board and selected at random or according to schedule by supervisors and managers of the area. This ensures safety and cleanliness of the workplace is maintained and that quality checks are being performed.

- - - - On the web
Kamishibai also exists in an electronic format for use on a computer. Stephen P. Lepisto and Jennifer Diane Reitz of Accursed Toys created a computerized version of the art form.

- - - - Kamishibai performers
Kamishibai storytelling is currently being conducted as part of an ongoing campaign to promote world peace. Twenty-four-year-old Maki Saji (a Buddhist nun) created a kamishibai based on the story on one of the many children, Sadako Sasaki, who suffered as a result of the atomic bomb raid on Hiroshima in 1945. Saji has presented kamishibai quite extensively around the world, this year marks her thirteenth year of delivering her stories. She has now presented over 250 performances.
In May 2010 she was a delegate at a Meeting of the Treaty on the Non-Proliferation of Nuclear Weapons at the UN in New York, where she performed to promote a world in harmony and free of nuclear arms.
- source : wikipedia

河童紙芝居 Kamishibai of the Kappa legends is quite popular.

Here is a growing list of local legend told in the prefectures: 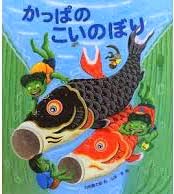