Students of the local grammar school prepared a kamishibai 紙芝居, telling the story with some picture cards 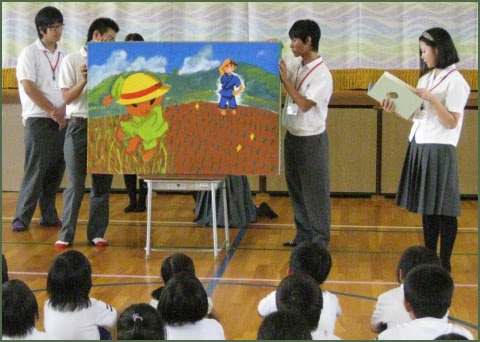 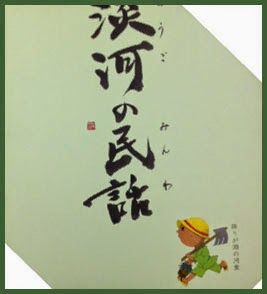 Once upon a time, there lived a hard working man in Ogo, let us call him Danna, from morning to evening he tended to his fields and produced delicious rice.
One day he saw a man coming up from Kudarigabuchi, calling on him:
"I help you weeding the rice fields and all, if you let me stay in your home" he begged.

When he began weeding, he was so fast, really so fast, it was quite amazing.
So Danna, decided to keep the man as a farm hand.

The new farm hand got up early before sunrise and worked till long into the evening.
When his own work was done he went to others in the village and helped them too. 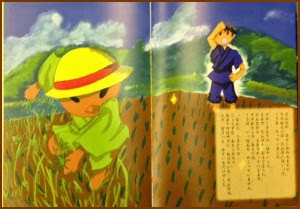 Three years may have passed, and Danna seemed to be come weaker and weaker, while the farm hand seemed to become faster and faster. A rumor began to spread in the village.

"This man, he does not seem to be human. He must be the Kappa "Kawataro" かっぱの かわたろう.
The seems to drink blood from the anus of Danna and is going to kill him, for sure!"

Even Danna began to have his doubts about his farm hand.
He had heard the story that a kappa would die if he has to eat his rice with chopsticks made from
ogara hemp reeds 『おがら 苧殻』.
He decided to give it a try one evening.

The next morning, oh wonder, the man did not appear for breakfast and when they looked for him, they found him dead and cold already.

Despite all, Danna grieved for this loss and arranged a sumptuous burial ceremony for him. He then built a memorial stone at the Kudarigabuchi.

Every year at O-Bon, the ancestor ritual in Autumn, the family of Danna went to the stone memorial, ate a bowl of rice with chopsticks of hemp reeds and prayed for the happiness of the Kappa in heaven.

This story shows us the gentleness of the people of Ogo. 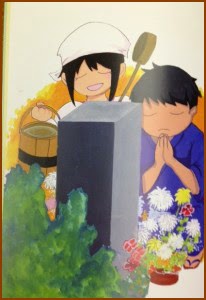 
The above story was created by students of Ogo.
Here they are visiting the Kappa river bank. 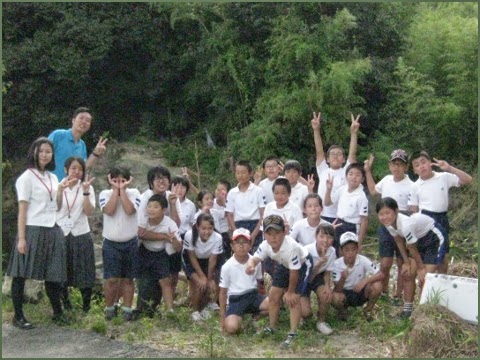 - quote
In ancient Japan,
hemp was one of the materials used for making clothing, fibers and paper. These valuable commodities were used in offerings at shrines, and the hemp plant had auspicious connotations because of its rapid growth and persistence against adversity.
. . .
In Shinto hemp fibre is used for making white paper and rope hangings, as in ceremonial use of shide and gohei. It’s said too that the holes in 5 and 50 yen coins derive from having been hung on hemp strings in the past, because the fibre was so durable.
...
“At Shinto jinja (shrines) and Buddhist tera (temples), certain objects are symbolically made from hemp.
For example, the leg-thick bell ropes, and the noren, a short curtain that hangs over the doorways and brushes the top of the head as one enters the room, must be hempen.
The noren 暖簾 acts as a symbolic purification rite, meant to cause evil spirits to flee from the body.”
Indeed,
the Shinto priests and faithful used hemp fibers as symbolic elements in their religious ceremonies.
One such use was the waving of a gohei (a short stick) with undyed hemp fibers attached to the end. Shaking these asa fibers above the patron’s heads apparently drove the evil spirits from the soul. Further, hemp was a symbolic gift of acceptance and obedience from the groom’s family to the bride’s in times of matrimony.
(Robinson 1996)
...
In another old tradition (at O-Bon),
rooms of worship were purified by burning hemp leaves by the entrance. This would invite the spirits of the departed, purify the room and encourage people to dance.
"On the first evening, fires of hemp leaves are lighted be-fore the entrance of the house, and incense strewed on the coals, as an invitation to the spirits. At the end of the three days, the food that has been set out for the spirits is wrapped up in mats and thrown into a river. Dances of a peculiar kind are a conspicuous feature of the celebration, which is evidently an old Japanese custom; the Buddhist elements are adscititious (derived from outside).”
(Moore 1991).
This ritual took place as part of a Buddhist holy day for “giving respect and making amends with departed ancestors”. The current tradition at this August Obon festival involves the similar practice of leaving offerings of the departed’s favorite foods on the grave, perhaps to purify or satisfy the restless soul. At some time in the past, hemp leaves were likely a part of this ritual as well.
- source : John Dougill - Green Shinto

quote
- - The descendants of Amenohiwashi
crossed over to Awa Province in Shikoku in search of lands to cultivate grains and hemp. As a result, the Awa Inbe clan developed the tradition of offering hemp and paper-mulberry textiles to the emperor on the occasion of the imperial accession ceremony or Daijōsai.
- - Busha sai
Sacred Archery Festival or Foot Archery Festival (depending on the Chinese characters used to write the name). An archery rite held on March 17 at the Hotaka Shrine (Hotaka jinja) in Hotaka Town, Azumi County, Nagano Prefecture. Ritual objects featured in the festival include three bows strung with hemp and fourteen arrows, of which two have written prayers attached and are called the Arrow of the Kami and the Arrow of the Lord.
... Another Sacred Archery Festival is held at Tsushima Shrine (Tsushima jinja) in Tsushima City, Aichi Prefecture on the sixteenth day of the first month of the old lunar calendar. Gohei (ritual paper streamers) are placed on top of the targets and the shrine's administrative head (gūji) shoots arrows towards heaven and earth. Six archers shoot in pairs, two arrows each. The bows are made of willow with hemp strings.
- - Jingiryō
The Laws on Deities of the Taihō and Yōrō codes.
Each district needs to provide one sword, one deerskin, one hoe, and other miscellaneous items; each residential unit must donate one jō of hemp; and each provincial governor is responsible for furnishing one horse.
- - Kukatachi
The Japanese characters are also read kugatachi. This ritual is a type of trial by divine will used to judge the legitimacy or veracity of a person's claim. ... t relates that a large cauldron called a kukabe was placed on Amakashi Hill at Kotomakado Cape. clan representatives first purified themselves by cleansing their hair and bodies (mokuyoku saikai) and then put on yūdasuki (yudasuki, a hemp cord worn when performing rituals to keep the sleeves out of the way) before performing the water ordeal.


How to kill a Kappa
quote
Wayne found a starving Kappa in a well in a cave in 1942. He chained the Kappa and supplied it with girls for food, taking advantage of rejuvenating properties of the water in which the Kappa lived.
Kappa appear to have heightened strength and to some extent speed. However, their most important quality appears to be their resistance to harm and healing abilities. They seem to feed on females, using the nourishment they obtain from them to trigger the healing process, which can be imparted upon the waters in which they immerse themselves in. Humans who drink from this water receive similar benefits, like longevtity and vitality.
The easiest way to kill a Kappa
is to knock the top of its head off, spilling fluid out of its head and immediately killing it.
- source : lostgirl.wikia.com 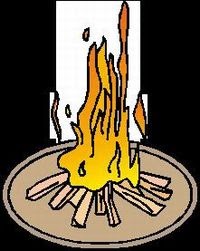 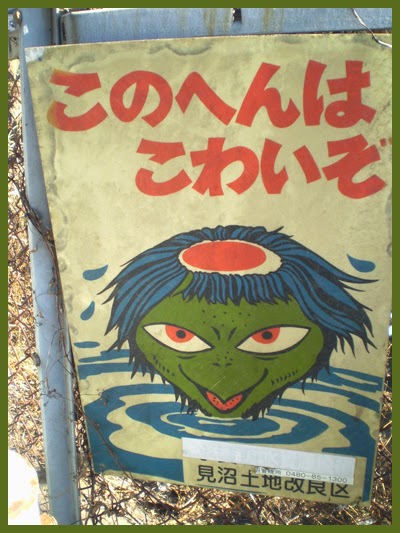 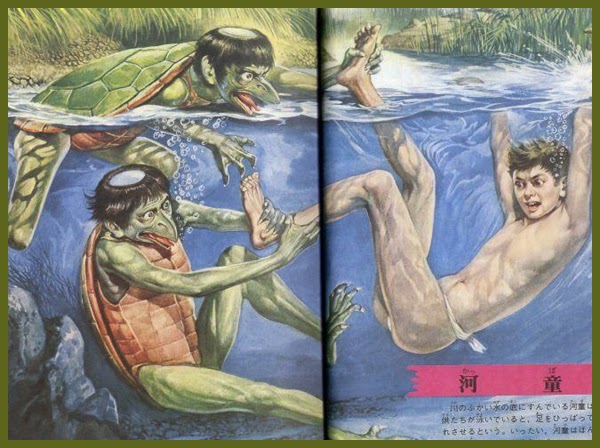 More about the Kappa and ogara:

On July 24 there is a ritual called "fire festival of Atago 愛宕の火祭り.
ogara (nowadays straw ropes) are burned while the children chant "yasaiyaa, yasaiyaa 「ヤサイヤー、ヤサイヤー」".
Then the fire has gone cold they take the coals and smear it all over their face and body and then go to the river nearby for a swim. The coal from ogara will protect them from the river imp Gawatara, so that he can not come and pull out the soul ball of their anus.


A legend from Akita 秋田県
Once a Kappa slipped on some ogara, fell down and lost the water from his sara plate on his head. He soon lost all his power.
So nowadays if people want to swim safely in the local rivers, they take some ogara and hemp strings to protect themselves from the kappa.
source : namahage.is.akita-u.ac.jp - Akita

Email ThisBlogThis!Share to TwitterShare to FacebookShare to Pinterest
Labels: - - Haiku and Senryu - -, - - Legends - -