The kappa is a mischievous water goblin of Japanese folklore. This article presents an overview of some of the characteristics of the kappa, including the dish-like cavity on its head, its penchant for eating cucumbers, its aversion to gourds and to iron, and its habit of trying to pull horses, cattle, and humans into the water. Some of the major critical literature regarding the kappa is discussed, including work by Yanagita Kunio, Orikuchi Shinobu, Ishida Eiichiro, and structural anthropologist Cornelis Ouwehand.
The concept of folklorism (folklorismus) is briefly defined and applied to the kappa belief.
Through folklorism, artists, writers, cartoonists, and commercial interests have transformed the kappa from a malicious and unpleasant water deity into a harmless and lov­able mascot.
- source : Nanzan University - PDF file


The Book of Yokai 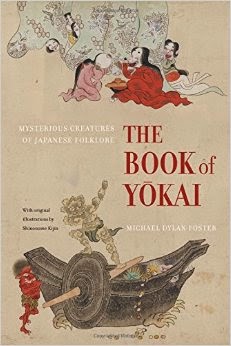 ... His first book — “Pandemonium and Parade” — grew out of these studies and forged many of his Japanese connections in the yokai world.

Leaving Japan in 1993 after nearly four years, Foster did not yet think of folklore as an area of study, although his Japanese had progressed enough to enjoy the local stories, particularly on a trip to Tohoku and Iwate Prefectures, and the city of Tono, an area rich in folkloric traditions where, coincidentally, the founder of folklore studies in Japan, Kunio Yanagita, had extensively researched. Returning to the University of California at Berkeley to start a master’s degree in “something practical,” Foster realized he could not forget the stories —
particularly the stories about the kappa, a Japanese water sprite legendary in Tono. Luckily, the university offered a master’s program in Asian studies, and he wrote his thesis on kappa.
After graduating and returning to Japan to study the language intensively, Foster moved onto Stanford University, graduating in 2003 where he wrote his doctorate dissertation on yokai.
... “As a folklorist, I like to have ambiguity. If I get one thing across in “The Book of Yokai” it is that there are many different versions of all these creatures, and you can not say anything definitive about them except to create broad categories.”
source : Japan Times, January 2015

- quote
COMBAT and SUMO
The chief delight of the mischievous Kappa is to challenge humans to single combat. Indeed, the Kappa delights in Japanese sumo wrestling, and often challenges its victim to a sumo bout.
Writes scholar Michael Dylan Foster: :
“In one legend involving sumo, some children are playing by the water when a child with whom they are unacquainted appears and challenges them to sumo. Observing this child closely, they realize it is actually a kappa, and that there is water in the sara on its head. Accordingly, they shake their own heads; the kappa imitates them, spilling the water. Bereft of all strength, it is forced to leave.
This love of the sport of sumo can be found throughout much kappa lore. One common method for defeating the kappa when challenged to sumo, or any other confrontation, is simply to bow politely. The kappa, though mischievous, is essentially a polite creature who defers to human ritual; it will bow in response, spilling its water, and thus losing its power.”
- source : Mark Schumacher

Michael Dylan Foster:
"The kappa is notorious for attempting to lure horses and cows to a watery death; but the key word here is attempting. In most versions of this legend, the kappa fails; its plan backfires and it (or just its arm) is pulled by the startled horse all the way to the stable. The kappa's success rate in fondling women's shiri in the toilet may be slightly higher, but often on its second attempt its arm is grabbed and yanked from the body. And when its mischief goes awry, when it is weakened from losing water from its sara or incapacitated (emasculated) by a yanked-off arm, the honest and benevolent side of the kappa's nature surfaces.
In order to be set free or receive back its arm (the arm can often be reattached within a certain number of days), the kappa will take an oath. It will pledge, for instance, to stop harassing people in the area, or to assist with work in the fields, or to teach its captor secret bonesetting techniques and formulas for making medicine and salves. It should be noted that this last trait - the kappa's familiarity with bonesetting and other medical procedures - is one of the most widespread of the beliefs associated with the kappa.”
- source : Mark Schumacher

Michael Dylan Foster:
“One of the better known of the kappa's traits is its love of kyuri, or cucumbers. Many of the festivals associated with kappa include offerings of cucumbers (e.g., Takeda 1988, and Orikuchi 1955,). Here again, the complexity of the kappa belief is apparent. As Takeda points out, there are some regions where it is believed that eating a cucumber and then swimming will lead to certain attack by a kappa, while in other areas it is a way to ensure protection against attack (Takeda 1988).
Other foods to which the kappa is partial include nasu (Japanese eggplant), soba (buckwheat noodles), natto (fermented soybeans), and kabocha (pumpkin). .
Although the kappa is attracted to some foods of the uri, or melon, grouping - such as kyuri and kabocha - it is clear that it has an aversion to hyotan (gourds), which are also of the melon group.
The Nihon shoki passage cited above shows that the power of hyotan to confound the kappa was understood early on.
In one of the folktales involving kappa, the so-called kappa muko, or "kappa bridegroom tale" (Ikeda 1971), the same motif appears. A farmer, whose fields have dried up because of drought, offers his daughter to anybody who can irrigate them. A kappa succeeds in this task and receives the reluctant bride. The daughter, however, challenges the kappa to sink some gourds in the river. The kappa soon exhausts itself trying to complete this impossible task, and abandons the marriage.”
- source : Mark Schumacher

. - Persons writing about the Kappa - Personen - .